NDI was designed to work on good quality gigabit local area networks using TCP and Bonjour technologies. Mobile apps have shown that NDI can also work well on Wifi networks, although the need for c. 100mBit communications requires very good quality communication between the device and the Wifi router to achieve full frame rates. NDI is designed to run over existing 1 Gigabit networks. This is achieved through the use of video data compression with the NDI codec which delivers 1080 full HD video at VBR data rates typically around 100mBit/sec.

Any NDI source* on your local network will be discovered by Wirecast and listed as NDI source under Capture Devices in the Source Input menu. 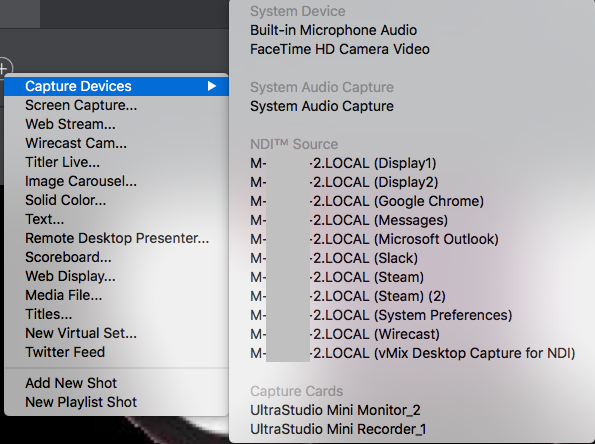 Adding one of these sources will create a new Shot for that source.

If you have selected NDI source, the NDI Source Properties tab will display. In addition to the standard controls, an NDI source will also have the following: 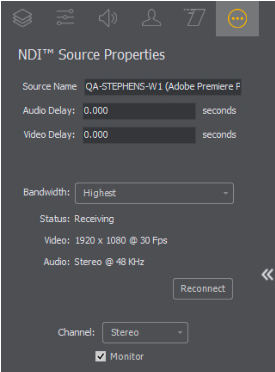 Video Delay: Enter the amount of time (in seconds, as short as 1 ms) to delay the video
Bandwidth: Select the bandwidth use: Highest (max quality), Lowest (max efficiency) or Audio only (video bandwidth not applicable).

Note: NDI networking requires that your network has port 5353 open for mDNS device discovery, as well as one port per video channel (starting from port 5960 and onward) transmitted by an NDI source, plus one additional port for messaging.

NewTek NDI - Some of these applications require an email address to register for the download. Some are free and some are paid applications.
Mac users - the NewTek NDI apps are also available on the MacApp Store.

For additional third party applications for your operating system, you can search for NDI applications. Some of these applications are paid and some are free. We do not specifically recommend any company or application over another.

*Wirecast could detect any NDI source on the network and subnet, meaning any device running an NDI application may be seen as a source.