I saw this as a promoted feature, but there is almost nothing explained about it in the v.10 User Guide.  So I started experimenting with the Recorded App Audio feature.

After making some test recordings and not finding anything showing up under that disclosure arrow on the Audio Properties panel, I found that you first have to turn that ability on in the Recording Configuration panel. And it is strangely hidden away in the "gear" button, and that only shows up if you have "Record: Computer Audio" visible on your recording options, and even then, that gear icon ONLY shows up when you happen to hover over it.  So not easy to find in the first place.  I recommend moving that to a Preferences panel option.

Then I tested making a recording again with several audio source apps running on the computer.  Viola! They showed up as separate tracks in the timeline, each with it's own app name in the label.  So great to have this ability and control, but only if you can figure out how to turn the option on in the first place. (Which is NOT in the current version of the manual.)

Then I was greeted with visible entries under the disclosure arrow next to "Recorded App Audio" on the Audio Properties panel.  This is where the lack of transparency became evident.  There are tool tips to support the volume sliders to control the individual app audio levels.  But there are also checkboxes next to each app name, which are unpopulated by default. 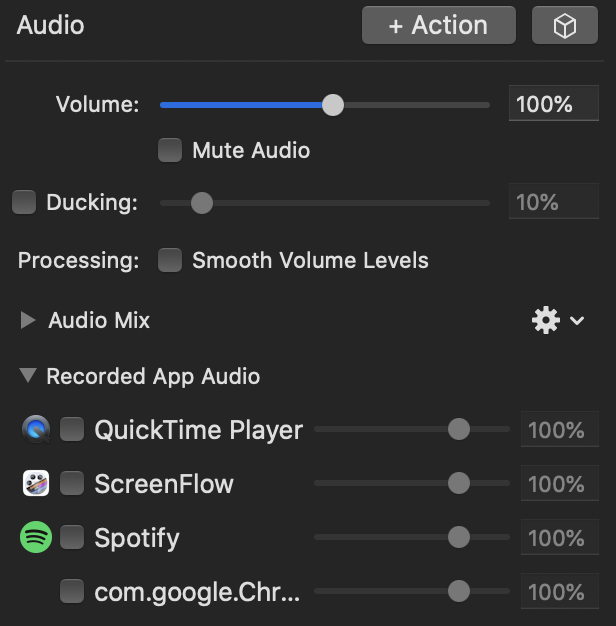 There are no tooltips to explain the purpose of those checkboxes, and when I clicked on an app's audio track in the timeline, that app's checkbox gets a check in it.  What does the check mean?  All the other app audio is still audible even with only one app having a check next to it. Does it mean that when you will only get that app's audio when you export if it is checked?

Then I Command-clicked to select two app audio tracks in the timeline, and the checkboxes for those two apps both received minus signs [-].  With no explanation for what that means. 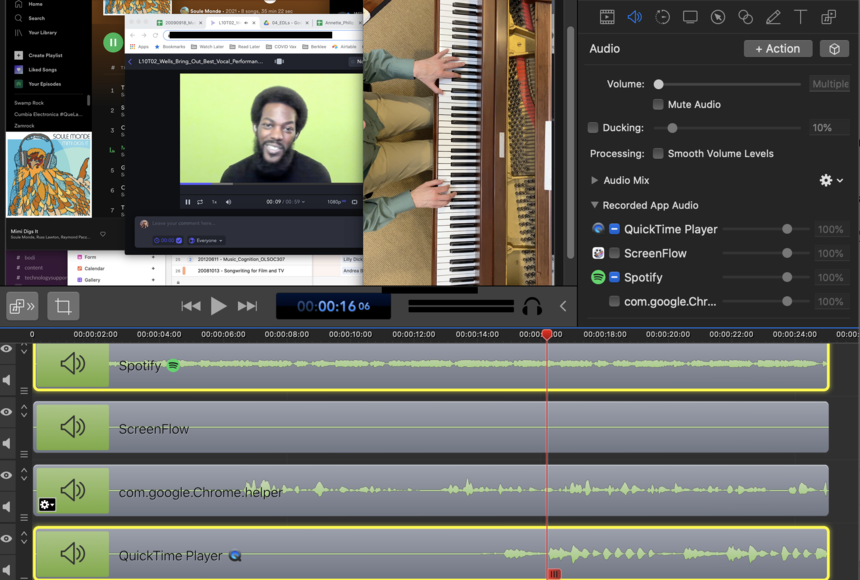 The fun really began when I selected one audio track in the timeline and started clicking on the checkboxes to see what that did, and the icon for that track in the timeline started to get additional icons for the other apps that I had checked, and the waveform in that timeline track started to show the content of the additional apps that I had checked on, summed with the original app's audio content waveform. 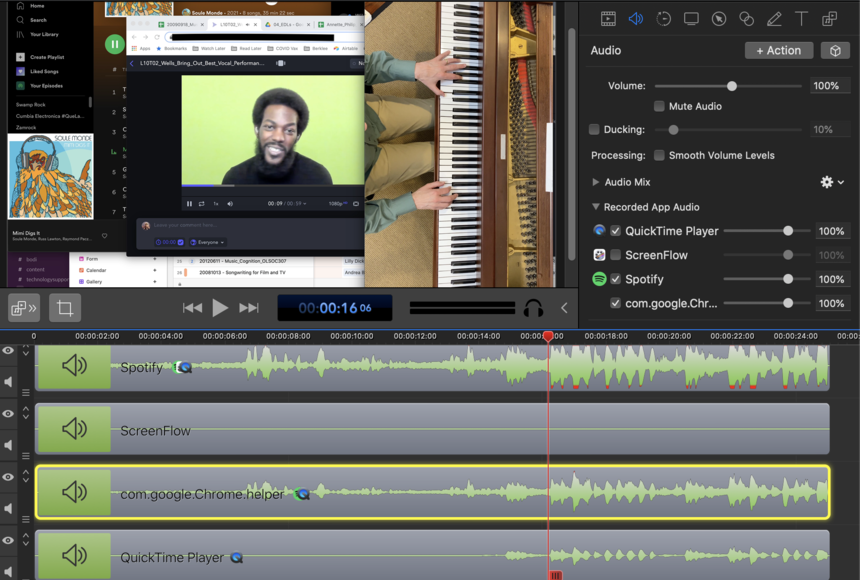 I am guessing that this is possibly supposed to allow you to combine various app audio into a single track to save real estate in your timeline.  But why show the other individual tracks if you are combining them  into one audio track again.  I am just not sure of the intended use scenario for these actions.

And there is still not explanation of what a [-] in the checkbox means and how that function would be useful.

In the manual, Page 126 explains how to adjust the level sliders under "Adjusting App Audio" but does not mention the checkboxes at all.

Page 185 lists "Extract App Audio" as a menu item, but has no description or explanation for that menu item like the other menu items on that page have.

I'll try updating to the new 10.0.3 and see if there is any more explanation offered in the form of tooltips.  But this seems like a great feature, it simply needs some transparency as to how to use it.  In both the manual and in tooltips in the UI.

Thanks much for any light you can shed on this new feature and it's intended configurations.